On the Menu at Prohibition Pig 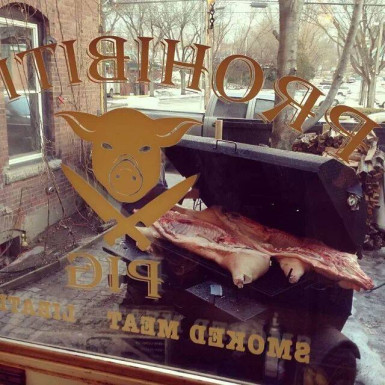 Chef Michael Werneke cooked in all corners of the country before moving to Vermont to make award winning cheese at Jasper Hill. He fell in love with the state and local food scene but wanted to get back into a restaurant kitchen. He has found his spot at Waterbury's popular brew pub-Prohibition Pig. "Pro Pig" is known for their extensive beer list, amazing cocktails, and "Creative Americana" cuisine-especially their mouthwatering barbecue entrees.

What is Chef Mike excited about?
His Eastern North Carolina-style Chopped Pork BBQ...

Chef Mike uses pork raised by Ben Nottermann at Snug Valley Farm in East Hardwick, in fact, Mike was one of the first to sign up for exclusive pork offerings when Ben expanded last year. Chef Mike admires the care Ben takes in raising his pigs, and the proof is in the pork. The BBQ pork dish starts with a whole hog, slowly smoked for 18 hours. The pork is then dressed with a cider vinegar based barbecue sauce that goes back seven generations in Pro Pig owner Chad Rich's family! The sauce cuts the rich, smoked meat perfectly. Chef Mike serves the barbecue with hush puppies or on a sweet potato bun with coleslaw and a housemade pickle-recipe handed down by Chef Mike's grandmother.