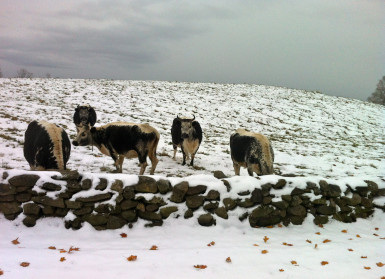 When Ted and Linda Fondulas took over direction of Newhall Farm around six years ago there were already quite a few residents, including a herd of cattle unlike any other. The Randall is Vermont’s own heritage breed of cattle, and about 30 years ago they were nearly extinct. Agreeing to care for these animals meant more than care and feeding for Ted and Linda, it meant helping restore a piece of Vermont’s agricultural heritage and building a future for an incredibly special animal.

Randall cattle were developed over the course of 80 years on the family farm of Samuel Randall in Sunderland, Vermont. The breed is an “all-purpose” animal, meaning they are equally good for dairy, meat and draft work. They are also particularly adapted to New England climate. In the 1980's there were fewer than 20 of these cattle remaining from the Randall Farm. Thankfully Cynthia Creech, a farmer from Tennessee, took a particular interest and rescued the remaining cows from their likely trip to slaughter. Newhall Farm's Randalls are direct descendants of Cynthia's rescued herd, and they have a mutual agreement to maintain the breed. Since then, the cattle have been declared Vermont’s heritage breed, and a dedicated effort to restore the Randall legacy is underway.

Ted and Linda have spent their time with the Randall slowly growing their herd and working with geneticists to ensure they are bred properly. But as Linda Fondulas says, the best way to maintain the herd is to “give them a job.” The Randall’s breed naturally and are slower to mature, so they aren’t ideal for beef production, but they have qualities that make them perfect for humanely raised, pastured veal production. The Randalls prefer to be outside foraging, no matter the condition. A Randall mom can competently care for her calf on pasture and fend off predators. A calf can be raised with their mothers, on her milk and out on pasture, unlike the veal calves that Americans are so familiar with. The veal produced in this way is called “rose veal” because of the rosy color the meat takes on from the free movement and diverse diet of the calf. The meat is exceptional--the Randall rose veal underwent chef-run taste studies and was found to be silkier and smoother in texture, and extremely tender.

Chefs are ready for sustainable, humanely raised pastured veal, but public perception of veal means that there is a necessary educational component to serving the veal. Luckily, Ted and Linda have an extensive culinary background as the proprietors of the, now closed, Hemingway’s Restaurant in Killington and have been working with an exclusive handful of VFN Chefs to be sure the story of the veal, and the breed, carries through on the plate. Four Columns Inn and Artisan Restaurant, The Inn at Weathersfield and The Backroom are all partnering with Newhall Farm.

Read about upcoming Randall dinners at The Backroom in Pittsfield here.