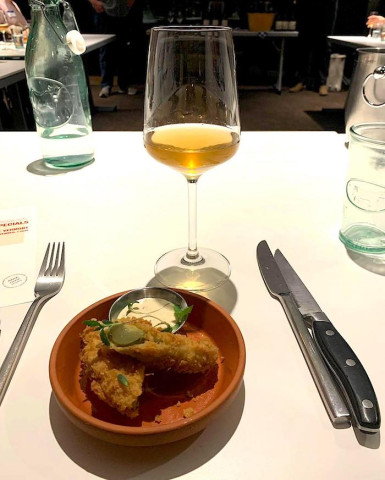 “Wonderful pairings and exploration of the range of what VT wines can be, and what they can bring to the table.”

“Back in culinary school when I was young and had no concept of wine, I had a short class on wine. Now I feel like I’m playing catch up; I would pay more for regular wine pairing workshops, monthly. This was marvelous!”

“More and more of our wedding clients are requesting Vermont wine and we would like to educate ourselves to best serve them.”

Industry members from restaurants, universities, and lodges gathered at Hotel Vermont for a workshop with executive chef, Doug Paine, and Matt Canning, Food & Beverage Manager, on November 7, 2019. Participants shared that they were attending to learn, expand their VT wine selection, expand evening service and include [VT] wine, create a VT only cheese box to pair with wine, and that they get requests from customers to have VT wine & beer at events/weddings. We also had Jordan Barry, food writer for Seven Days in attendance. She wrote a nice piece for the Bite Club, Drink Up: Vermont Wine and Food Pairing Workshop.

Paine and Canning began by explaining that Vermont wine started being noticed when winemakers decided to make VT wine, instead of trying to replicate what other areas do. They explained that the identity of VT wine is being formed, especially the hands off approach, native yeasts ferments, unfiltered, focusing on the cellar work, and fermentation character.

As for food pairing, Canning and Paine spoke about the common denominators of acid, salt, & fat and letting the wine dictate the direction of the food.

This is Fable Farm’s first public release of 100% grape wine with La Crescent grapes bought from Lincoln Peak Vineyard. The wine was aromatic and tropical.  An open top fermentation was done to inoculate the wine. Participants noted it doesn’t have as much acidity as one would expect. The beautiful copper orange hue is from skin contact in maceration (for over a month). The Amida was paired with lacto fermented salt pickles (a simple fermentation technique employing salt and time) with some seasoning in the breading, made from vegetables grown in Charlotte. This was a congruent pairing, whereby the acidic fermentation qualities of the pickles mellowed the acid out of the wine. Folks noted that the spice mixture and fat in the dipping sauce went well with the wine and that it was tighter on the palate than on the nose, so goes well with a hot appetizer versus a salad.

Iapetus Subduction is a single varietal Marquette and the brain child of Ethan Joseph, Shelburne Vineyard’s winemaker. The Iapetus (“YAPetus”) wines have a natural wine ethos, are fermented with native yeast, and have very little filtering. It is fun and interesting to try these wines side by side with some of the more traditional wines that Shelburne makes. Because Marquette is usually pretty high in acid, it’s harvested late with more sugar and produces a medium body wine with medium to medium-low tannins. Sometimes it’s advised to bring people on board by talking about Pinot Noir, as it’s in Marquette’s lineage. The Subduction was paired with red meat, adding a sweetness with the elderberry glaze. Folks noted the wine got fruitier after eating the ribs, which were a slow braise, Spanish style - a complementing pairing. The garlic in the polenta worked with the wine, as well. Someone also noted that the vegetal notes in the wine finished off the dish as if it had braised greens on top.

Fable Farm’s Lil’ Dandy is a sparkling hone-apple-dandelion wine from flowers steeped in aging barrels of cider and mead. This is very much a product of agriculture and their land, with a re-fermentation in the bottle and a little fresh pressed apple cider at the end. This was paired with a new washed rind recipe from Orb Weaver cheese, with fruit added to pair with the fruitiness of the wine. Folks said they could smell the washed rind smell when the wine was poured, even before the cheese was brought out. A sip of wine was completed by a bite of cheese.

The Brianna variety was bred by Elmer Swenson in Wisconsin and has less acidity, is foxy, grapey, has a unique weight, and a fun nose. This was originally going to be paired with the cheese course, but Canning and Paine made a change based on what they thought would go best with the cheese and declared that this complex wine stands alone.

In conclusion, their advice is to get one of our local wines in someone’s glass as a first step. They advise culinary professionals to keep an open mind on pairings and make adjustments as needed.

Attendee survey results were very positive and many indicated more workshops like this should be offered in the future. Sixty percent of participants were not previously familiar with any of the 3 featured wineries and left feeling much more prepared to offer VT wine suggestions to their guests and customers.