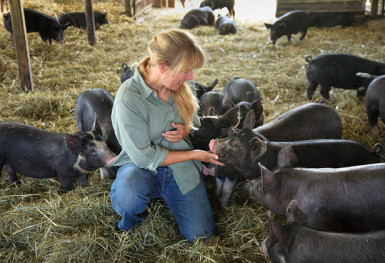 Alethea Bahnck had two requirements of her career: to work with animals and to work outside. She found her true calling when she got her first Berkshire hogs. Alethea saw there was a need for wholesale, pasture-raised Vermont pork year-round and the high quality, perfectly marbled pork unique to the Berkshire breed was perfect for quality-minded chefs and butchers. Now, Alethea's farm in Bridport, VT is 300 pigs strong with a breeding herd of 50 sows, and she's able to sell the majority of her product in Vermont to retailers like City Market and Healthy Living. You'll also find her pork on each menu of the Farmhouse Group's Burlington area restaurants.

Other than the strong Berkshire breed, what makes Vermont Heritage Grazers' pork so unique?
Like many Vermont food enthusiasts, Alethea's pigs also enjoy the terrior of where they are from...

"Pork is transparent, it tastes like whatever you feed it" explained Alethea. She had a huge problem finding the GMO-free, high-quality feed she needed to create the finished product she wanted, so Alethea started making her own mix--sourcing GMO free grains, soy and corn that she would grind herself. Alethea's ambition and focus on quality drove her one step further--now she is growing her own oats, wheat, peas, barley and corn for feed on her farm and her pork will be certified GMO-free next year! The special farm-grown feed mix is accompianied by Stoneyfield Organic yogurt whey delivered in a 8,000 gallon tanker truck as part of their recycing program--no plain water for these prize piggies!

Pork producers like Alethea, who pay such close attention to detail and quality, are vitally important to support. Vermont's own Barry Estabrook just released a book - Pig Tales: An Omnivore's Quest for Sustainable Meat, on the dangers of the pork industry's factory farming practices and sings the praises of farmers like Alethea. Consider this on your next trip to the butcher - look for Vermont Heritage Grazers and taste the difference!