Fresh off the Farm - Shelburne Orchards 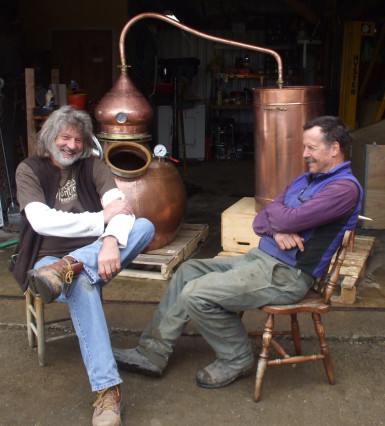 Nick Cowles, farmer and owner of Shelburne Orchards, and Megan Humphrey, the Orchard's events, marketing and all around champion, were busy setting up for their 13th Annual Small Farms Food Fest on the blustery September morning we stopped by for a visit. We were greeted with cider doughnuts and escorted to a porch overlooking the 80 acres of orchards stretching down to the shores of Lake Champlain. The century old orchard has been in Nick's family since the 1950's and Nick has ushered it through many changes and introduced a handful of delicious apple products from Ginger Jack to Cider Vinegar and those famous cider doughnuts, but Nick's latest passion is rooted in an old, secret family tradition--distilling. Nick is in his 5th year of distilling artisanal Calvados (apple brandy).

A small batch apple brandy is a work of art that reflects all the choices made by the creator through the process from the apples themselves to the wooden barrels used to age the spirit. Nick has been curating a section of his orchard grown specifically for the brandy and grafting specific cider apple varieties that he has selected to be part of his mix. Pressing for his brandy has an extra step that differentiates it from the pressing done for sweet cider--the apples sit with their skins in the mash before they are pressed for juice. The juice is fermented for six weeks with the addition of a yeast to turn it into hard cider. After the six weeks, the hard cider is distilled through a wood-fired copper still that's shape and size are specific to making fruit brandy. The still is run December through January, and each batch of brandy is double distilled through the hand-made Potuguese still - it takes 500 gallons of hard cider to make 50 gallons of 100 proof brandy.

Another special touch of the distiller is when they make their "cut," and separate the distilled spirit into the heads, hearts and tails. The heads are the first liquids distilled that are brash and strong, the hearts come in the middle of the distillation with the purest taste and the tails are the bitter, weaker end of the process. The heads and tails are re-distilled with the next batch of cider, while the hearts are ready for their second and final run through the still before barrel aging. Nick has a number of methods for separating his batch from smell, taste, mixing with water or burning (hearts burn with a blue flame or "dragon fire" according to Nick).

The twice distilled spirit is aged in barrels as old as can be found, previously used to age whiskey or port, that will infuse subtle flavors of caramel and vanilla into the brandy. Each batch will be aged for at least 8 years. Nick released a limited run of two year aged brandy in 2013, but the next release will launch in 2017. Vermonters and spirit lovers should eagerly anticipate this next launch and what will come from Nick's cellar in years to follow. The barrel aged brandy will be blended to taste with different batches, some will be mixed with sweet cider and aged as a delicate pommeau, and some won't be touched for years to come--like the batch made on the birthday of Nick's grandson which will be shared in celebration of his 21st birthday in 2030! The taste we had in his cellar will be hard to improve on, but we'll trust Nick's expertise and unique apple farmer palate as we wait patiently for the next sip.

Learn more about Dead Bird Apple Brandy's unique name process, and take a look at Nick's still and his new Brandy aging earth cellar in our pictures on Facebook.