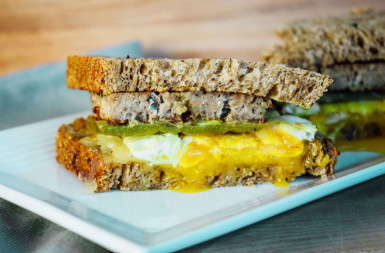 In early October, Ashley Nunez, Prepared Foods Buyer at City Market South End, traveled to the Food Tank Summit on Food Loss & Food Waste in New York City through the VFN Conference Program. City Market is now serving the follow up project to that trip - a waste reducing breakfast sandwich at their South End location. Chef Michael Clauss notes that City Market has always been aggressive about reducing food waste, but this project gave them a chance to try out some different things. The sandwich features:

There will be more details on this particular sandwich and City Market’s approach to reducing food waste in a future post. In the meantime, a quick look at the larger Food Tank Summit takeaways. . .

Recordings of all sessions are available online. For Ashley, some highlights were:

You can also read more about food waste issues at the Food Tank website where they regularly publish articles on this and other sustainability topics.

Two things that stood out as work Vermont is already doing well (in Ashley’s words):

A question that stood out was what more Vermont might do with gleaning:

One source of detailed information on the status of Vermont gleaning and potential for more is the 2016 Salvation Farms study “Food Loss in Vermont”.

Want to learn more about combating food waste? The James Beard Foundation has started the course “Creating a Full-Use Kitchen,” which is focused on culinary professionals and particularly on culinary instructors / mentors training the next generation. It is an online program, details are here.

There’s one more recently returned Conference Program attendee we have left to hear from, Jacob Powsner of Baird Farm Maple Syrup who went to the Food Loves Tech Expo in NYC in early November - look for more from that soon. We’ve enjoyed this pilot year of the VFN Conference Program. If you are a VFN Partner Member interested in helping shape the future of this project, let us know - we’ll be reviewing the program in early January to develop our longer term vision and strategy. E-mail helen@vermontfresh.net.