This is the first installment in a series taking a closer look at some common food labels. For a quick snapshot of common labels found in Vermont look at our labeling guide. This information is part of VFN's work to improve communications between Vermont chefs and Vermont food producers, including through our updated and expanded member-to-member business directory (if you're a current VFN member, you can login now to view the directory and update your listing - don't remember your login info? Email info@vermontfresh.net).

One of the least clear food production labels is also the one of greatest concern to the Vermont Fresh Network: where the food came from.

At VFN, we measure whether our culinary establishments are “local” food focused by setting minimum thresholds in 4 key areas - number of partnerships with farms, percent of food dollars spent on local foods, diversity of local food on the menu, and participation in the larger community to encourage a stronger local food system.

We use applications to verify local food purchasing, send emails to follow up on farmer partnership claims, review menus, and engage with members on community participation. Tracking dollars spent is the trickiest bit, we are not forensic accountants here, but we will work with members on how they calculate these numbers and best practices for creating benchmarks to track their own performance. We also work with anyone who questions what they are seeing on a menu to get to the bottom of what’s going on. Often it’s a question of what’s sourced through a distributor or retail purchases (especially for smaller locations), a change in sourcing with a lag time in being reflected on the listed partnerships, or a change in staff and a break in the communication about where food came from. More often than you might think, it’s farms with similar names and someone checked the wrong box. But when a member repeatedly misrepresents local purchasing, intentionally misrepresents it, or doesn’t correct the error, we take away their VFN partner membership.

[Have questions about local food purchasing claims within the network? E-mail zea@vermontfresh.net]

This review process doesn’t affect supporting members or prospective members - the Vermont Fresh Network wants everyone to participate in a positive way in the local food system and we’re happy to provide resources to culinary establishments in the early phases of local purchasing. However, they cannot use our logo or our marketing.

The state of Vermont monitors “local” claims via the Attorney General’s truth in labeling laws. The Vermont Agency of Agriculture plays a relatively small role, particularly after inability to police the use of the Vermont Seal of Quality ended that program (although its revival has been contemplated at various times).

The AG’s standards apply to the unqualified use of the word local. If you put with equal prominence how you’re using the term, for example “Local New England Apples”, that’s fine. If you don’t explain, then it needs to be food from within Vermont or 30 miles (often interpreted as Vermont plus 30 miles). For specialty food items the majority of ingredients (excluding water) need to be “local” as measured by number, volume, weight, or value. Alternatively, the term local can qualify a particular ingredient “Local Maple Peanut Butter” would have local maple, not necessarily local peanuts.

Meat is a trickier subject. A general rule of thumb, and one used by Farm to Plate, is that meat butchered here needs to have also spent the majority of its life raised here (75%+). Meat that is “substantially transformed” in Vermont (ie made into charcuterie) falls under the specialty food rules.

A local label doesn’t work in quite the same way as a USDA-inspected seal or an Organic certification - producers don’t have to apply to gain access. On the other hand, it is not an unregulated term like “natural”. Anyone can call something local but if they’ve incorrectly labeled it they may face enforcement action. The AG’s office investigations can be accessed via public records request but they generally keep their investigations confidential, so there’s no easy way to know how frequently they act on the local labeling laws in particular. They have stated in the past that they do not receive complaints for misuse of “local”. More notable have been times when they enforce the use of the specific word (or image) “Vermont”, such as requiring Cabot remove the Vermont reference from its label.

[If you see a “local” label you believe is being misused, you can file a complaint with the Attorney General’s office as a consumer - note that this complaint is not anonymous because of public records request laws. If you write “anonymous” in the contact information space the complaint is de facto anonymous, but you cannot receive a response. There is not currently a structure set up specifically for within-industry complaints, only the standard consumer grievance process].

Finally, one sometimes-overlooked aspect of local representations is direct sales avenues, like farmers markets. In Vermont, farmers markets do generally require that the people selling products at a market be the same people who raised those products. In other parts of the country a farmers market brings together folks from all over, not all of them producing their items locally. And in some places that do enforce local production, the common definition of “local” is a lot different from ours. Check out the well labeled local signage from the Chicago farmers market below. A 300 mile drive isn’t a common trip to market in Vermont, but can be if you’re headed to the city (particularly if that city is Chicago and market goers want to find local maple syrup - but hey, at least they weren't reverting to the fake stuff and we applaud them for going the extra mile (literally) to avoid it). 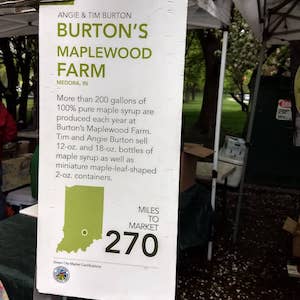