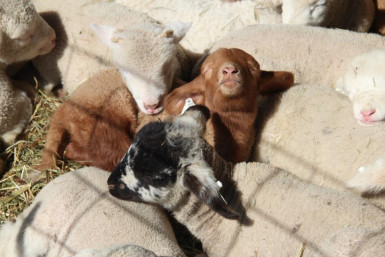 Ben Machin is a fourth generation sheep farmer. He and his partner Grace raise Tunis and Dorset Horns on his farm in Corinth, Vermont. Ben wasn’t convinced that sheep farming was his future until his grandfather made his last wishes clear-that his aging flock carry on in Ben’s hands. They have now restored not only a heritage breed, but also a beautiful 40 acre ridgetop farm with plenty of grass and forage (the flock was originally located in Greenwich, NY). A welcome surprise on their new farm was the generous, early support from neighbors-three families offered their property as extended pasture for the flock.

Spring may have come too slowly for most Vermonters, but Ben and Grace have been busy welcoming 300 spring lambs to their flock. This was their largest lambing season and they found it deeply satisfying to strengthen a flock whose lineage goes back 90 years!.

You can order lamb and wool products directly through Ben and Grace's website here!