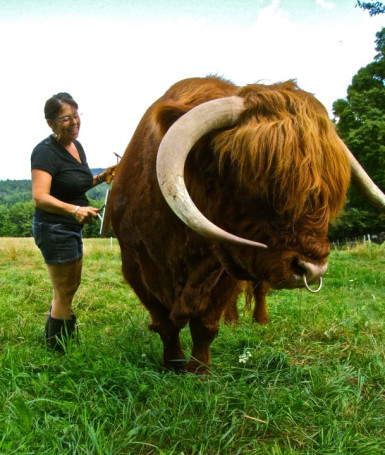 Raising Highlands is a labor of love. The beautiful, gentle giants are a slow-growing breed--raising them to market weight takes two years, which means feeding them through two winters. Because Janet and Ray can’t sell beef at twice the cost of their competition, they needed to find another way to make their farm viable and continue the Shat Acres Highland bloodline. That’s when Joe Emenheiser, the state livestock specialist for the University of Vermont extension made a suggestion to try crossbreeding.  The solution seemed counter-intuitive at first, but strategically-crossbred animals display hybrid vigor and are quicker growing and stronger. “The trick,” Janet informed us, “is to intentionally breed two purebred animals, and not breed the hybrids themselves.”  Janet and Ray set off to Scotland to explore potential crossbreeds. They settled on the Shorthorn for its thick skin, which is helpful in colder climates, and its docile personality, similar to the Highland. The result of the Highland Shorthorn crossbreeding was everything they’d hoped for – an animal that matured to size quicker but did not compromise the quality of the Highland beef.  “Every time we deliver beef to Healthy Living,” Janet shared, “they can’t wait to open the box and see what we’ve brought.., they do it right in front of us! It’s the most beautiful and tender marbled beef.”

Janet and Ray may have figured out the secret to thriving as Highland Cattle farmers, but they plan to stay small with their beef production. “We want to stay very local with our beef,” Janet shared, “we could be in the Boston or New York markets, but we want our customers to be able to come see the animals and see how they are raised, ask questions and bring their families. We enjoy interacting with our customers directly.” Instead, they can see their herd grow on other Highland Farms across the United States by selling their award-winning breeding stock. This summer, Janet and Ray will travel to the Pacific Northwest to visit their prize-winning bull, Raisin Cain (son of Cinnamon Raisin), where he now lives on beautiful Sauvie Island near Portland.

You can congratulate Janet and Ray on June 14th at the Waterbury Country Club when they receive the 2016 Small Business Administration Award for Family-Owned Business of the Year.