On the Menu - Ariel's ¡Cantina! 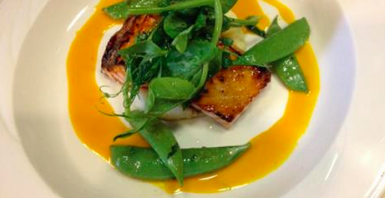 Vermont is not exactly known for its authentic Mexican cuisine but maybe it isn't so surprising that, in true Vermont fashion, some of the best Mexican food in the state can be found at a tiny farm to table restaurant in Brookfield. For the past 16 years, Chef Lee Duberman and her husband Richard Fink, have traveled to San Miguel, Mexico escaping the cold and immersing in the native cuisine. In October, Lee and Richard pack their son, dog and half their cooking equipment into a station wagon and embark on the 46-hour trip to San Miguel. They return in April in time for Restaurant Week, bringing home new recipes and techniques.

“Mexican cooking techniques are so much older and surprisingly complex. Different seeds, spices and chile peppers – all requiring different preparations – it’s very labor intensive.” Lee explained. Lee spends her time in Mexico getting to know the local food scene, even staging as a guest in her friend (and Mexican Top Chef contestant) Matteo Salas’ renowned fine-dining restaurant. “Mostly, though, it’s taco trucks, carnitas joints and trips to the market to cook at home,” she shared. They even do some catering for other expats living in San Miguel – to test out recipes before bringing them back to Ariel’s.

What’s the hardest thing about returning to Vermont after a winter away?

Mexico is abundant year-round, and the markets are full of local produce – all from less than two hours away.  When Lee and Richard return, it’s still the very beginning of Vermont’s growing season and local, fresh poblano peppers and cilantro are still a couple months away. Waiting gets hard for a chef running a seasonal menu. Meat, however, especially Green Mountain Girl’s Pork, is available and perfect for carnitas.

Want to try Ariel’s Cantina? You can often find cantina dishes on their seasonal dinner menu, but the next pop-up cantina is July 17th! Stay up-to-date on Ariel’s events on their Facebook page.